Friday, May 27, 2016 Debut of JIBILIAN/SETAR/CORA at Stick Night Concert!!

Friday, May 27, 2016 Debut of JIBILIAN/SETAR/CORA at Stick Night Concert!! 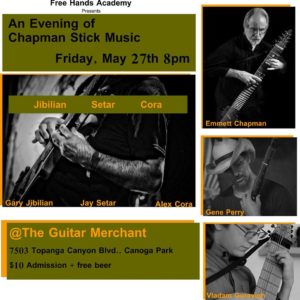 Join us for a wide array of tapping artists, mostly Stick, and one NS/Stick player, at The Guitar Merchant in Canoga Park, CA. This will be the debut performance for JIBILIAN/SETAR/CORA, which consists of Gary Jibilian on NS/Stick, Jay Setar on drums, and Alex Cora on guitar and vocals. Other players include Emmett Chapman, Gene Perry, and Vladamir Gurevich. Great listening room, light snacks, wine and free Stone Brewery beer, plenty of free parking on Topanga and in the lot behind the venue, all ages.