The Winter NAMM Show 2016 was a blast! Had a great time playing the NS/Stick at the C.B.I. Professional Wiring Systems booth, Thursday, Friday, and Saturday. The new booth location in Hall A was in a prime spot, located at the intersection where two of the main walkways meet. Best day was Saturday, when Steve Vai was signing at the Carvin booth, about 80′ down the aisle, so had quite a few guitar fans walking by as I played the NS, and stopped to see me jam, and inquired about the “Stick-type” instrument.

Thursday, I was joined by drummer, Mike Mallais, who just arrived that day from Vancouver, and accompanied me on cajon. His playing added a nice rhythmic element to the jams, and the coolest thing was that we just met that day. He sounded great, and listened to what I was playing, following each rhythm change as if we rehearsed a few times before our debut jam. Great guy as well, which always sets a positive vibe when performing with someone for the first time.

Later that night, I spent the evening with my cousin, Chris, and my bro, Mark, at the Marriott pool patio, where we drank quite a few Stone IPA’s, and cracked each other up with one story after another, about our past memories in high school, families, hockey, and musical experiences. We ended the night in true NAMM fashion… Pigging-out at Denny’s!!!

Friday began with the quest for strong coffee, then walked around the show floor for a bit, where I spotted my biggest influence in my early days of playing bass, David Harbour! I’ve seen David play shows with guitar wizard, David T. Chastain, many times in the early ’90’s in Detroit, and would always be blown-away by his amazing bass solos, and especially with his tapping skills. David stopped by the C.B.I. booth later that day as I was jamming, and he tried out the NS/Stick for the first time. No surprise at how he began to tear it up, as if he’s been playing an NS for more than just a few minutes. Can’t wait to hear David’s playing on the new Leather Leone release!!

Saturday was, predictably, the busiest day on the show floor, and the most foot traffic by the booth. Met quite a few people that were interested in purchasing an NS/Stick, as well as giving them a chance to play it for a bit. It was great to see how quickly they were able to play the NS, and apply their various techniques to the instrument. Later that night, I hung out at the Hilton and Marriott, catching up with a bunch of new, and longtime friends. Looking forward to NAMM 2017!! 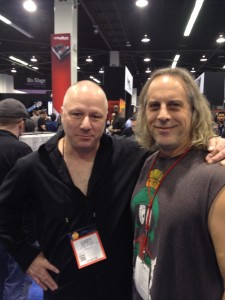 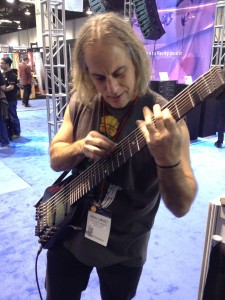